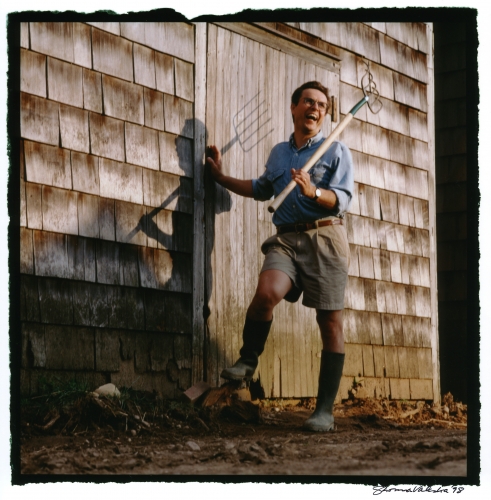 This article appears in May/June 2009: Issue No. 5 of Edible Manhattan.

The tiny, nutty, dark green rosette called mâche—rhyme it with posh and pronounce it mosh—is one of the latest leaves to hop into haute salad bowls. But to superstar chef-turned-farmer Eberhard Müller, the difference on the plate and the palate between bagged supermarket mâche and the crop he grows at Satur Farms out on Long Island is as great as the divide between pale, salmon-toned January tomatoes and red-ripe August heirlooms.

“Mâche is one of those products that loses its flavor and texture in a matter of two or three days,” he shrugs, “so there is no sense of shipping it in from California.” The presence of mâche in upscale markets seems a sign that culinarily we’ve come a long way, baby—but so has the mâche: Trucked across the country, it may well have been several weeks since it was sealed in that plastic bag. “If you have had fresh mâche once,” insists Eberhard, “you will never ever go back.”

September through June you’ll find Eberhard’s kind of mâche betwixt the tines of the city’s finest forks at the several hundred New York restaurants Satur Farms supplies, including the likes of Daniel and Jean Georges. For years the farm has been a secret resource in such kitchens: ingredients grown for chefs by a multistarred chef before any of his colleagues donned overalls—metaphorically or otherwise.

Back in the spring of 1982, Eberhard had arrived at Windows on the World as sous-chef; fresh from six years cheffing in Paris, where citizens were offended if served hours-old salad, Eberhard found stateside produce, shall we say, lacking. “There was only iceberg lettuce, overgrown horse carrots, old parsley and frozen Brussels sprouts,” he shudders in remembrance.

He soon signed up for the services of a man named Andy Arons, who months before had launched a business called Flying Foods that jetted in European goods for Manhattan’s perfection-starved chefs.

“Eberhard ordered a ton of duck magrets and fish,” recalls Arons. Adds Eberhard: “And the tiny little French beans. And herbs—Andy was one of the first to bring herbs in—the chervil and tarragon, all the soft culinary herbs that didn’t exist in this country, baby leaf lettuces and radicchio and frisée, mushrooms, the chanterelles and porcini—all the stuff we were accustomed to in France and couldn’t get in New York.” By December the overnighted, ice-packed Dover sole and loup de mer helped Eberhard land a promotion to Windows’s executive chef.

In 1985 Gilbert La Coze and his sister Maguy, who had won a Michelin star in their Paris Restaurant Le Bernardin, recruited Eberhard to help open Le Bernardin here the next year; three months later they won four stars from the Times. Eberhard FedExed in tender produce from the West Coast, then headed west himself to spend several years at his own Santa Monica seafood restaurant called Opus. But after an economic downturn in L.A., Eberhard was reeled back to the city in 1994 to become executive chef of Lutece.

And then one chilly January afternoon in 1996, Lutece’s maître d’ pried Eberhard from the kitchen to meet Paulette Satur, a representative from a Long Island wine distributor. The relationship soon evolved beyond business, and for July Fourth weekend they took a trip to Connecticut; during the two-and-a-half-hour drive, the vivacious, attractive blonde, who had degrees in horticulture and plant physiology and had grown up on a farm in Pennsylvania, told Eberhard of her dream to live on a working farm. “It was not a normal [dream] for New York women—not then,” Paulette admits.

“I told her that works for me,” says Eberhard.

That October, for Paulette’s birthday, the new couple took their first visit to Long Island wine country and bid on an 18-acre property. They wed on Christmas day and, come spring, planted a quarter-acre kitchen garden—both for themselves and the Lutece kitchen—tending it on Sundays, Eberhard’s only day off. As their first crops sprouted in Cutchogue, Paulette’s wine customers began asking about the herbs, and soon the pair were packing their green Nissan Pathfinder with bounty for chefs at a half-dozen restaurants. Early Monday mornings, before Eberhard arrived at Lutece, they dropped orders at the Four Seasons, Gramercy Tavern, Le Cirque, the Water Cluband retailer Dean & DeLuca.

Both the garden and the list of chefs have grown steadily since. “I always said the good thing about wines here is that they are so highly aromatic,” says Paulette. I found the same thing with our herbs. It involves the confluence of the bay, the sound, not being too near ocean.”

Perhaps, but it’s just as surely the varieties of produce—mostly European—they grow and the attention they pay them. Eberhard had learned firsthand that high-quality ingredients were, well, the missing ingredient that left New World fare inferior to old and was determined to change that—by growing them himself.

“It all started back when we first started the farm and we went to a big vegetable exposition in Europe,” says Paulette. “We walked in and the first thing Eberhard saw was a butterhead lettuce and his jaw dropped. He’s a chef who’s worked in Paris and New York City, and he said, Why can’t we be growing this? Why doesn’t anybody grow something like this in America?'”

Mâche was one of the first crops they trialed, planting seeds Paulette had ordered from one of the top heirloom seed companies. “Eberhard said, ‘This isn’t right!'” Paulette remembers. “‘It looks OK to me,’ I replied. But what did I know? I’m American.”

Says Eberhard, “I had a knowledge of how it should look and how it should taste, but I never could figure out, I had no clue, how to get there. God, I can’t describe how bad it used to look.

The next January, while they were visiting his family in Germany, Eberhard’s sister-in-law put a big bowl of mâche—in season in the winter—on the table. “It was amazing!” recalls Paulette. “I almost died. I almost ate the whole thing.”

Back on Long Island, mâche with this flavor and texture eluded the pair season after season, until Eberhard had an epiphany of sorts: “One of things I didn’t know is that mâche is actually a crop that grows on relatively poor soil. It wants to fight.” The fifth year, he finally he got it right.

This pursuit of perfection is the couple’s modus operandi. Explains Paulette, “We take each crop and just knock it and knock it and knock it until we get it right.” Like leeks, for example. They painstakingly pile a hill of soil ever higher against each leek as it grows, preventing sunshine from hitting the shafts and allowing the development of elegant specimens with foot-long, flavorpacked glossy whites. If you use herbicides to kill weeds, you can skip the hills—but wind up with the truncated, tell-tale two-inch whites of most leeks on the market. Last year Satur Farms harvested three-quarters of a million leeks—all hilled with mulch—on 25 acres. This year they have increased planting to 1 million.

But growing a perfect crop is only half the question; even the most explosive flavors start to fade at the moment of harvest. “The bottom line,” says Eberhard, “is that for every hour a vegetable is sitting out of its optimum temperature after harvest, it loses flavor, shelf-life and nutrients. How long is it before a lettuce leaf loses its incredible texture and flavor? To me, it’s within six hours. It’s unrealistic to tell somebody in New York City, Well, you have to eat your spinach within six hours.’ Then, I think nothing should be older than four days at the most.”

How Satur Farm fosters freshness is a study both in technology and an age-old understanding of the nature of a food. Harvest baskets are filled in the fields within 10 minutes, immediately stored in a refrigerated truck, then driven a few minutes to a vacuum cooler that dries surface humidity and lowers the crops temperature from 80, even 100 degrees, to 35 degrees in just 15 minutes. Explains Paulette, “It’s one of the fancy toys—they cost over $200,000—that make our produce better.”

Better indeed. “Their vegetables are so vibrant with flavor, so crisp, clean,” says Joseph Realmuto, executive chef of the Honest Management Group, whose restaurant group includes Nick and Toni’s.

He’s in good company—restaurants citywide rely on Satur. But unlike, say, Eckerton Hill or Flying Pigs, farms whose Greenmarket presence has made them household
names, Satur has long been unknown outside professional kitchens except as an occasional adjective on an expensive menu.

Now that’s changing: City eaters can finally lay their hands on Satur-grown ingredients. Take greens. In 2008, Satur sold 100,000 pounds of leaves including mesclun, Asian stir-fry mix, a wild Italian arugula and Eberhard’s beloved mâche to city restaurants, plus another 100,000 pounds to retail stores like Food Emporium, Gourmet Garage and Dean & DeLuca. Almost all the bulk mesclun in Whole Foods’ Manhattan stores—including greens used in its prepared foods—are Satur’s. You can order the farm’s products through Fresh Direct and, if you have a chef ‘s budget, on their Web site at saturfarms.com.

As the farm has grown, it’s surpassed cooking as this star chef’s livelihood. In 2000 Eberhard left Lutece’s stoves for Bayard’s, and five years later he turned in his toque altogether, trading in his whisk for a spade. Will he chef again? “Not if I can prevent it. It’s like they say in Germany, You can’t dance at more than one wedding at a time.'”

Employees say Eberhard can still make his wife swoon with a freshly pulled bunch of radishes offered up as a farmer’s bouquet, but they take their business very seriously. Farming together fulltime, the couple is all about innovation, especially ways to extend the growing season: They cover some outdoor crops with plastic sheeting from Europe that raises temperatures beneath it by 50 degrees and this winter even experimented with growing greens in Florida for clients who serve salad 12 months a year. They’re also introducing new flavors to the United States, like the subtly bitter, crinkled, maroon-and-white leaves of an Italian chicory called Tarvido. Like Belgian endive, the care-intensive plant requires darkness to transform its color from dark green and to tame its otherwise-unpleasant bitterness, but Eberhard is determined, so Tarvido had a trial run at some restaurants this winter, and was even served at President Obama’s inaugural lunch.

But perhaps an even more meaningful customer is Andy Arons. The Flying Foods entrepreneur went on to found Gourmet Garage and, as its CEO, now buys produce from one of the very chefs for whom he once imported it. “Their handling of produce is really key,” marvels Arons. “Their mâche, it’s almost like a Platonic ideal.