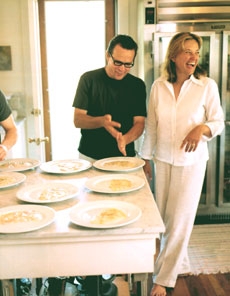 Far from the clang and clatter of Eberhard Müller's restaurant kitchen in New York City, a different sort of commotion is taking place. At Satur Farms on the North Fork of Long Island, the home of Müller and his wife, Paulette Satur, the mood is bustling, but in a quieter sort of way. Here the sounds of voices and motors drift out over the land, rather than echoing back to you.
Müller and Satur purchased their property five years ago - the day after they became engaged. "I had been searching for a farm for six years," Satur says. "I never found one until the first time we looked together." Satur tends the farm using organic methods, producing exquisite vegetables and herbs for hundreds of New York City restaurants, including Bayard's, where Müller is executive chef. This morning, however, the two roam through the neat rows of baby greens and fragrant herbs for their own purposes: They're hosting a lunch to celebrate the first spring crops. "Every first crop is an event," Satur says. "We still get excited."
As a chef, Müller has long known the value of fresh ingredients. But living on the farm has given him a new appreciation fort he rhythms of the land. "You can treat foods more simply when they're in season," he says. "Suddenly you realize they have flavor."
Everything that will be served at lunch has been picked today; nothing is refrigerated or prepared ahead. "Absolute freshness is especially crucial for the white asparagus," Müller says. This sweeter, exceptionally delicate version of the familiar green vegetable lacks color because it is shielded from sunlight as it grows. "In Germany's Black Forest, where I come from, the white asparagus is picked in the morning, and the best chefs serve it only at lunch," he says. "By dinnertime, it's not considered fresh anymore – not even good enough for leftovers."
Also on the menu is another of Müller's specialties: a delicate fluke sashimi. He arranges each plate with then, translucent slices of the fish and seasons them with olive oil, lime, a handful of herbs, and salt and a pepper. Müller was one of the first chefs in the United States to serve raw fish at a non-Asian restaurant, yet it never seemed exotic to him. "All over the world, everyone who lives on the coast eats fish this way," he says.
While Müller prepares the various courses, Satur sets a casual table. Guests – a congenial group of longtime friends and colleagues – arrive, some toting bottles of wine from Long Island vineyards. They gather and chat on the terrace, nibbling crudites and sipping sparkling wine as they eagerly await the meal.
Even after everyone sits down to lunch, Müller continues to move between the dining room and the kitchen. It's his day off from the restaurant, but he doesn't mind preparing the meal. "Hardly a day goes by that I don't cook," he says. "I always want to eat good food, and I enjoy having company."