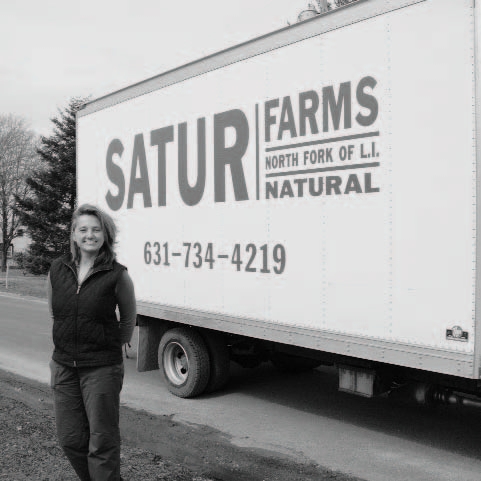 “Think about eggs,” said Ms. Satur, standing in her 3,000 square foot greenhouse with irrigation nozzles overhead, an endless carpet of green below, and a handful of potted fig trees in the corner. “You can taste the difference between supermarket eggs and farm-fresh eggs.” The yolks of fresh eggs have a richer flavor, are a darker shade of orange, and “stand up” when cracked into a pan. “It’s the same thing with salad.” Whether eggs or tomatoes or baby fennel, Ms. Satur has no doubt that eastern Long Island can deliver such timely delights as well as anywhere else in the nation, and perhaps better. In fact, she’s banking on it.

Satur Farms, the Cutchogue business she started eight years ago with her husband, New York chef Eberhard Müller, will plant 200 acres this season. That’s four times the area of last year, and up from just a few acres when the couple started out in 1997. Now, Satur Farms is making a name for Long Island produce throughout the New York area and beyond. The farm’s produce stars in salads at top New York restaurants and in clamshell containers on the shelves at King Kullen. FreshDirect trucks will distribute it this summer.

Today, over half of the nation’s lettuce—and nearly all of it during the winter—comes from Monterey County, California and Yuma County, Arizona. This dependence seemed particularly precarious this past winter, when that salad bowl was hammered with hail and inundated with rain. “The lettuce they shipped looked horrendous,” Ms. Satur said. “That’s what we risk when we put all our eggs in one basket.” At last year’s Baum Forum, a who’s who of the New York food scene, which focused on how New York farms could feed New Yorkers, Ms. Satur told the audience, “If you want to compete with California, it has to be perfect.” That means harvesting lettuce in the morning before the heat has made the leaves bitter, and immediately moving them to an ultra-cool packing shed—precautions that help eliminate errors before the produce reaches the kitchen. In this respect, the North Fork’s climate helps.

“We’ve never seen a slug because of the sandy soil,” said Ms. Satur. “The constant ocean breeze keeps the leaves dry. Nature is more on your side than against you.” Of course, Ms. Satur and Mr. Müller weren’t planning to compete with California when they first purchased a farm on the sleepy North Fork, hoping to grow some of their own food. Back then, the couple would drive out from the city on Saturday nights, in the wee hours after Mr. Müller closed his restaurants. They rose with the Sunday sun, worked in the garden all day, loaded the car with produce, and drove back to the city Monday morning.

Friends in the restaurant business caught on fast. “They asked where we got our leeks,” Ms. Satur said, holding her hands about one foot apart. “The whites were like this long.” Almost overnight, the garden grew. The couple hired some help, installed an irrigation system, and bought their first tractor.

From the start, the farm focused on crops that suffer in transportation, since Mr. Müller wasn’t satisfied with what distributors offered his restaurants. “Mesclun was becoming a real commodity item,” Ms. Satur said. The mix of greens was selling for as much as $30 a pound—about six times the price of silver—and had attracted the interest of large produce packers in California, who automated the planting, harvesting, and processing. They designed multilayered plastic bags and filled them with nitrogen gas to keep the greens from wilting during the long haul and long shelf life. The result, according to Ms. Satur: “Salad started to lose its personality.”

Because Satur Farms is as much in the business of marketing produce as raising it, the farm supplements its own harvest with berries, winter squash, and other crops from nearby farmers—an arrangement that has helped this relative newcomer to eastern Long Island fit into an old farming community.

And to maintain the diversity of her offerings even in the off-season, Ms. Satur buys greens from an Arizona grower in the winter. “If I’m going to a New York City restaurant, I can’t just go in with leeks and potatoes,” she explained. This seeming inconsistency in the business model depends on some subtle, but important, distinctions. “I’m not shipping packing-house stuff,” she explained. “It’s food with personality. They are people I know.” Ms. Satur also draws the line at importing produce during the local growing season. “If it’s tomato season and you’re not selling Long Island tomatoes,” she said pausing and looking away to find the appropriate words. “It just pisses me off. It’s a disservice to all farmers, and it dilutes people’s impression and understanding of the seasons.” Understanding of the seasons, in fact, is the key to raising delicate foods. From early spring through the fall, the farm, which grows 50 to 60 different crops, reseeds some crops every five to seven days. In the salad category, Satur Farms produces microgreens (harvested just 10 to 12 days after planting), mesclun (leaves cut from assorted plants), and head lettuces (entire plants cut at the base).

To help choreograph this sprouting, Ms. Satur turns to her computer monitor and scrolls through screen after screen of color-coded spreadsheets that record crop varieties, planting dates, harvest dates, and assorted growing notes. “We can schedule it all as close as possible to have perfectly sized vegetables,” she said. “It’s brutal.” On March 19, Satur Farms planted its first crops under long rows of gauzy fleece—a “mini”-rotation that included six acres of mache, frisee, escarole, carrots, beets, and Swiss chard.

Spreadsheets aside, there’s no doubt Ms. Satur and Mr. Müller are serious about salad, and not just because they are willing to rise before sunrise in early March to plant it. They seek many of their seeds from German and Dutch companies that select varieties less for durability in shipping than for flavor and aesthetics. “The way Eberhard dresses arugula is not the way he dresses mache,” Ms. Satur said. “Subtle, but very different.” (Arugula wants a smack of citrus to counteract the peppery flavor. Mache wants a bit of sweetness along with citrus, diluted with water, to bring out its light walnut flavor.) At times, Ms. Satur, who grew up on her family’s farm in central Pennsylvania and has degrees in horticulture and plant physiology, misses working in the field, which has become her husband’s domain.

She spends her summer days, which start at 4:30 a.m., juggling customers, invoices, and deliveries. “Now it’s more of a scheduling aspect than hoeing a line,” she said. But there are other perks that come when the soil warms, the first microgreens sprout, and the farm begins cutting its first chives.

“When our white asparagus starts,” she said, “I put a pot of salted water on the stove, go out to the beds to cut the asparagus, give them a quick peeling, plunge them into the boiling water while whipping up a hollandaise, and call Eberhard in for breakfast. There is nothing like the first cutting of asparagus.”

The couple enjoys this routine with each successive crop. “I always tell our chef customers to ask me what I had for lunch,” she said. “Because that is what has just arrived. Just started. And is perfect for eating.”

THE SKINNY ON SALAD

Last year, the government found toxic levels of rocket fuel in California lettuce, having been contaminated by missile plants along the Colorado River. Just another reason to avoid the bland and tired California green that you find on supermarkets shelves in favor of the ultimate seasonal food: mesclun.

The word and concept originated in Provençal, France, where farmers would offer mixes of young, tender lettuces and other greens that were unique to each farm. (“Mescla” is old French for mixture.) In a traditional rite of spring, chefs and shoppers would seek out their favorite mix in the market. It was a popular form of designer food that long predated the modern obsession.

The best blends are a cacophony for the senses. Flavors range from mild to tangy and colors vary from dark emerald to ruby red. Mixes might contain as many as 10 types of lettuce, spinach, arugula, lambs quarters, purple kale, purple and green mustard, and other wild and cultivated greens.

Mescluns are generally eaten raw with a light dressing of oil, vinegar, salt and pepper, so as not to obscure the delicate flavors of the greens. (Substitute sesame oil, rice vinegar, and soy sauce for a refreshing Asian flair.) The mix may also be stir-fried or wilted.

Wary salad connoisseurs can take matters into their own hands by seeking out locally grown, organic mesclun.